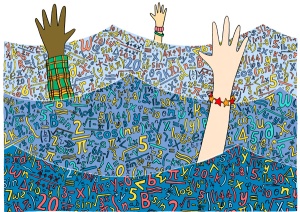 I had a whole other post planned for today, but it got bumped because yesterday I, like many of you, read the strangest op/ed piece that I think I’ve ever read in the NY Times.  And that’s saying something.  In the piece, Is Algebra Necessary?, author Andrew Hacker suggests, in a nutshell, that algebra is too hard to require it of students as widely as we currently do.  Dr. Hacker states that as many as six million high school students and two million college students daily struggle with algebra and asks, “Why do we subject American students to this ordeal?”

Apparently many took issue with Dr. Hacker’s questioning of the relative importance of algebra, because, with 475 comments posted to the online version, comments there are already closed.  And are there ever some scathing comments there questioning, not only Dr. Hacker’s premise, but also his sanity.  I’ll let you read those protests for yourself.

The thing that was so shocking to me was that nowhere in the article was the question of how we teach algebra called into question.  If we really do have eight million learners struggling with algebra on a daily basis, maybe we need to fundamentally shift how we’re approaching the algebra curriculum.

I’m not a math expert.  I did well in algebra I and II and in trigonometry.  I did terribly in geometry.  I had to take three quarters of calculus for my undergraduate degree in psychology and I failed the second quarter, thus taking FOUR quarters of calculus in total.  Generally, I’m a pretty competent learner.  But I can tell you that a big part of my failing that second quarter was the fact that it was taught in a lecture hall of 350 students by a professor who faced the board during the entire class, scribbled notes on it and mumbled his way through the “explanations.”  Those were the days before online or distance programs were available.  Heck, I didn’t even own a computer….I had one of those old Brother word processor devices that was one step up from an electric typewriter!

And maybe it’s my hubris, but I still don’t believe that calculus is just too difficult for me to understand.  Nor do I believe that algebra is just too difficult for those eight million learners Dr. Hacker refers to.  I’ll leave it to others to debate whether or not algebra skills are truly useful or applicable in the so-called “real world.”  (Though I can honestly say that I still use algebra to figure stuff out on a regular basis.)

Sure, there are some learners who are, due to organic issues, simply unable to learn complex concepts.  But I truly believe that we can design an instructional program that will work for the bulk of those eight million.  What if we designed an online program that was self-paced, adjusted to the performance of the learner, providing ongoing performance tracking and reporting, gave learners immediate and meaningful feedback?  What if we had….dare I say it…Programmed Instruction for algebra?

It’s one thing if we, as a society, decide that a subject isn’t “core” enough to teach in schools.  You won’t hear me advocating for the teaching of function theory or partial differential equations (yes, I had to look those up) in high school.  But by the same token, students not doing well in a subject is hardly reason to drop it from the curriculum.  Then we are on a slippery slope, aren’t we?

Let’s move on from blaming the student and…here…blaming the subject itself…and move on to the real question: What is the best instructional method for teaching complex concepts and learner repertoires?

The image included here appeared with the original article, “Is Algebra Necessary?” and credit is due to Adam Hayes.

i am a behavior and learning scientist. i hold an ed.d. in educational psychology and am trained as an instructional designer. i have spent more than 15 years working in education and instructional software design.
View all posts by karen mahon →
This entry was posted in Academics, STEM and tagged Algebra, Andrew Hacker, Applied behavior analysis, Behavior Analysis, Education, High school, Math, math education, Mathematics, Mathematics education, programmed instruction, STEM, Student, United States. Bookmark the permalink.